Eight years is a looooong time!

We are one of those couples that celebrate both anniversaries.  You know, the one where you officially started dating and the one where you got married.  I guess it’s just because we dated for so long that we were so used to celebrating on January 28th that it was just a habit by the time that we got married and started celebrating July 29th.  Plus, they are almost exactly six months apart so this leads to a celebration that’s perfectly timed!

I find it hard to believe that eight years ago Jason and I started dating.  I wonder if we actually used the term “going steady” or how we actually phrased it??  I was sixteen at that point!  SIXTEEN!  Jason was seventeen!  I remember on my birthday that year that Jason reminded me of Tim McGraw’s song Seventeen because it was new.  Do you even remember that song?!? We were just babies! It’s amazing to think that we started dating then and are still together.
Here is the very first picture we ever took together.  We weren’t even technically dating at this point but were just “talking.”  Oh the terminology!  🙂 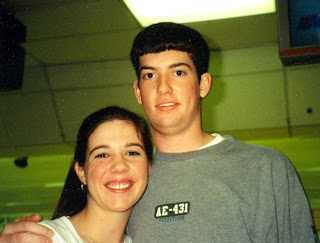 Ok, I’m pretty embarrassed that I just put that picture on the blog because I pretty much hate that picture.  We were at the bowling alley for goodness sake’s as part of the church’s Lock-Out, but still.  Please forgive us for being so young!
And now here is the most recent picture we took.  At dinner the night that we found out that we’re having a little girl. 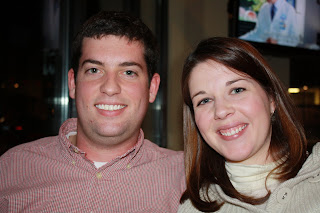 Wow, I can really tell I’m pregnant in that picture!  What a difference 8 years makes!
So much has changed in eight years.  We both graduated high school.  We both went to college.  I pledged a sorority.  Jason played college baseball at junior college AND at Alabama.  We both eventually graduated from college.  Got married.  Got jobs.  Got a puppy.  Bought a house.  Made couple friends.  Found a new church.  Moved home.  Took our first vacation.  And now we’re expecting a baby.  I can’t wait to see what God has in store for the next eight years.
Jason, there isn’t anyone that I’d rather spend my life with than you.  You are a wonderful husband and I can’t wait for the day when I get to see you become the father that you’ve always been meant to be.  I love you!

Reconciling Myself with Mercy