Friday marked Charlotte’s seventeen month birthday.  I can’t believe that we are a month away from a year and a half!  I haven’t done a recap recently of what Charlotte’s up to so I thought I’d take this chance to do one. 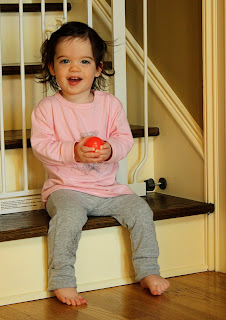 C still takes two two hour naps a day.  She usually takes one good nap and one nap that is a series of catnaps but I can’t bring myself to take her to one nap a day.  She is perfectly happy to be in her crib for those four hours and is, in a sense, resting and not running herself ragged all over the house so I can’t see a reason to go to one nap.  She does fine taking one three hour nap on school days or days when we go somewhere in the morning so as long as she’s easily adaptable to what we’re doing and is happy in her crib I’m going to relish those four hours a day to do things around the house!  Thankfully she’s also a great sleeper at night and sleeps 8 to 8.  I’m so glad that she loves sleep as much as her Momma! 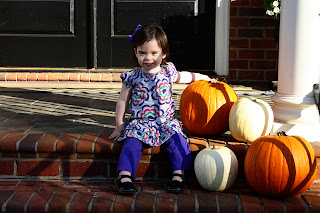 Getting well balanced meals into Charlotte has become a problem of sorts.  She’ll eat most any fruit but really won’t be bothered with veggies.  Beans and occasionally matchstick carrots are about the only veggies that she’ll touch.  She loves almost anything to do with cheese but Kraft Easy Mac is one of her favorite meals of all time.  She eats a decent amount of food and I try and keep it well rounded but it’s hard to come up with original meals for her that cover all the food groups.  She will usually try what we’re eating and sometimes she loves it and eats it all, it just depends on the meal.  She loves her milk but will happily drink water or lemonaide or juice if we give it to her.  We only use straw sippy cups at this point because she can drink from them very easily by herself.  But the cups we have continue to leak and so we’re trying to switch to new ones but C isn’t having any of it.  We’ll see if we ever are successful at changing! 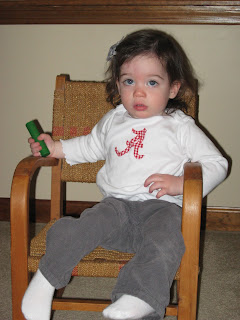 Charlotte loves her stuffed animals.  She was attached to her Elmo doll for a while after we got him and would carry him around with her but soon the attachment wore off and she would leave him in her crib all the time.  It has lessened to such that we forgot one of the Elmo’s in Tuscaloosa last weekend and haven’t bothered to get his replacement out of the cabinet because she hasn’t missed him.  She does love her Brown Bear and Brownie (her dog) and usually wraps them under her arms to sleep with but she is usually content to leave them in her crib.  When she does bring something with her when we go out she understands that they stay in the car and will usually toss them to the other seat before we can even open the door to get her out of her carseat! 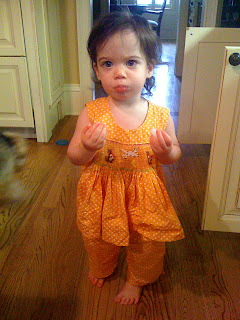 While I try and limit her tv viewing we do occasionally catch Sesame Street or Dinosaur Train.  She likes both of them and will glance up at them every now and then while she’s playing when their on.  She only typically sits down in my lap and watches something when she’s tired or sick although she has come to love football and will sometimes stand in front of the tv for a few minutes watching it.  Her favorite tv shows are probably the commercials that have animals on them like the one with the snake and bunny (Geico maybe?) and the Maxwell the pig one.  It doesn’t matter how far away she is from the tv when she hears that snake shaking his rattle she will run into the room yelling, “Hop! Hop! Hop!” which is her way of telling us there’s a bunny on tv. 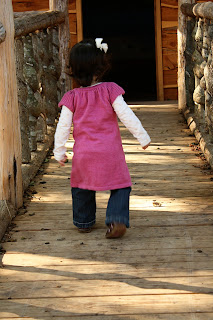 Charlotte is definitely a growing girl! When we took her to the doctor on the 10th for her ear infection she weighed 21.8 lbs.  And she is getting taller! She’s fully into 18 month clothes now and wears some 18-24 month outfits.  The sleeves are still a little long on some of her t-shirts, I have to roll the pants up once on a couple pairs of pants and they are, of course, way too big around the waist but they fit for the most part.  (After typing that it sounds like they don’t fit at all but they really do!)  She’s wearing a size 4 diaper and is starting to tell us when she goes potty so we’re thinking of trying to potty train over Christmas break.  We’ll see how that goes! Haha! 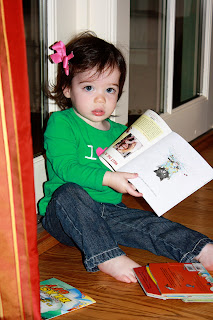 C is definitely a child of the new times.  She has a passed down cell phone from Uncle Charlie and loves to “text” on it with her thumbs going a mile a minute.  She holds anything she can get ahold of up to her ear and says “Ring, Ring” and then starts to talk.  She usually tells us she’s calling Papa G but it has started changing to more people.  She loves skyping but doesn’t understand why we can’t see people when we talk to them on the phone.  Because of this she’s pretty quiet on the phone but as soon as we hang up she starts yelling the person’s name because she doesn’t want them to go.  A few weeks ago we had to put her in time out for disobeying repeatedly and I heard myself say, “Charlotte, give me your cell phone, you have to go to time out!”  I never thought I’d be saying that sentence so early! 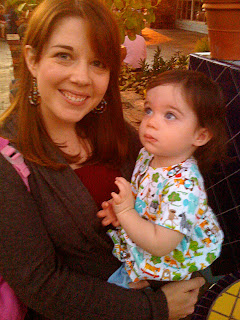 It seems like Charlotte is learning something new every day.  The only letter that she’ll recognize is a C but she points those out on anything that she sees.  The way she says C though is sort of like “esss” so we’re not to the point of saying it correctly yet.  She can say the colors blue and purple and she will correctly tell you that the sky is blue but other than that still gets mixed up on which color is which.  She is learning new words constantly so we’re having to make sure we don’t say anything around her that we don’t want repeated because she has repeated something after hearing it only once recently!  She mastered saying “Roll Tide!” a few weeks ago and this weekend started saying “Roll Tide Roll!”  It is, by far, one of the cutest things she’s done so far because she sticks her arm up to move like she’s got a shaker and her voice goes up on the “Tide” part.  I’ve got it on video and have to get it posted! 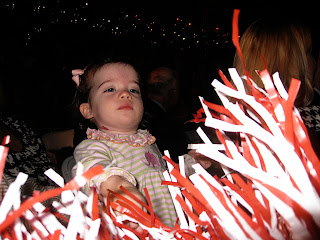 C also appears to be rather musically inclined.  She’s started “singing” with us to “Baa Baa Black Sheep” (she just sings “Baa Baa Baa Baa”) and “Happy Birthday”.  She also loooooves to dance and anytime she hears music she’ll stop what she’s doing and start breaking it down.  I LOVE watching her dance because she is so energetic and just loves it so much!  It is hilarious and it’s hard not to laugh (and a lot of people laugh and laugh loudly) so I hope that she doesn’t start getting self-concious about it.  It’s just so cute! Charlotte, I promise we’re not laughing because it’s bad, we’re laughing because we love it so much! 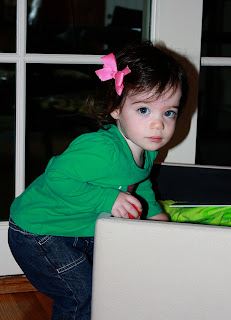 She has also gotten more independent recently.  She no longer cries when I leave her at Mother’s Morning Out and at playgroup she was content to do her own thing even when I left the room.  She used to have to see me to be happy but I was floored on Friday to realize that I didn’t know where she was and walked around until I found her playing with the other kids not caring where I was at all!  She learned this weekend to get herself into the chairs at her coloring table and is starting to do more and more for herself.  It’s sort of sad seeing her need me less but I know that she still needs me a lot and that it’s all part of growing up. 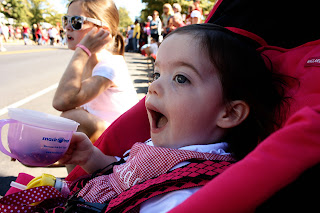 Overall, we are just loving this stage with Charlotte.  She is so personable and has become this little girl instead of a baby.  We love getting feedback from her like her signing “I Love you” or her starting to give us (and pretty much anything else) kisses.  She cuddles some when she’s tired or doesn’t feel good but isn’t one to sit in your lap for hours on end.  We love watching her explore and discover new things.  My favorite is when she figures out something new and her mouth just drops open in delight and amazement!

Charlotte,
You are our pride and joy and your Daddy and I love every minute with you.  You are a smart, beautiful little girl and we pray every day for you to retain your confidence and love for learning.  We want to teach you the right things and our hearts just melt when we hear you say “Amen” after we pray or starting trying to say “God is Great” at dinner.  We pray that you grow up with a love for God and continue to thirst for him your entire life.  We love you so much baby girl.  You make every day better and we are so incredibly thankful that God chose us to be your parents.
love, Mommy