When I was in fourth grade my parents built a new house for us.  When the house had been framed Mom noticed a large unused portion of space behind a wall and had a “Kid’s Study” built in instead of just walling the area off.  I thought it was really cool and we put our brand new Gateway computer that came in four or five HUGE cow boxes in it.  We ended up moving the summer before my freshman year in high school so we never really took advantage of the space.  But it has stayed in my mind as a good idea.

So when we were looking up things that we might like in a new house I saw lots of pictures of similar study areas and wanted to incorporate one if we had room.  I envisioned less of a closed off space and more of just a large desk area for the kids to do their homework in.  I recognize that they might want/need the peace and quiet of their own rooms to do intense homework but I thought that this would be a good place to work on group projects with friends or a good space for us to help them with homework and concepts. 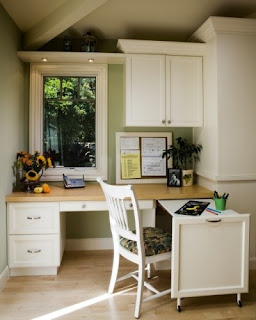 source
I love the pullout with more desk space. 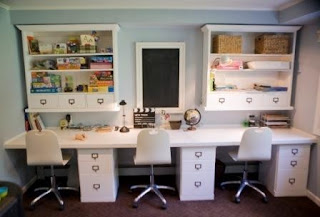 source
I like that each space is divided and also has their own set of drawers. 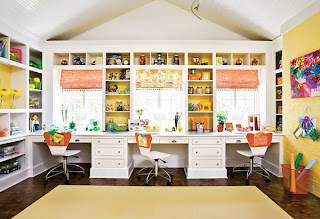 source
I love the vertical shelves and horizontal shelves above the windows. 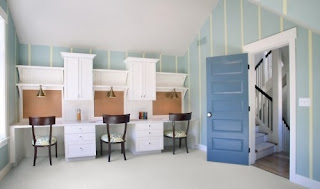 source
I like the lights over each study space as well as the cork board. 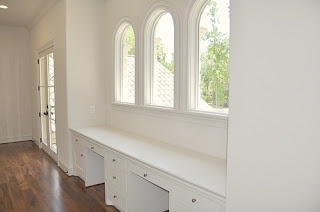 source
I think this is a good way to do it if it’s in a pretty public space.
What I ended up designing was more of an open desk in the middle for multiple people with cabinets on each end.  That way if the kids are working on a group project they won’t be separated by 12-16 inches of cabinet between their workspaces but if it’s just the two of them they can each have their own side.  That will also allow us to have a large wall space divided between cork board and a white board. I’m going to also try the vertical cabinets and horizontal surrounding the cork/white boards but there will be a ceiling slope so I’m not sure how much I’ll get to do.  I hope that this turns out to be as neat and useful of an idea as I envision it in my head!

Previous Story
Posts of the Week
Next Story
Pre-School