I figure that since I got this post up before Thanksgiving, I’m going to chalk it up as a win.  🙂

If you remember last year, you’ll remember that I had planned the kids costumes since May.  I had Charlotte a Minnie dress and James a dog costume for Pluto.  And then James came out tiny and the dog costume swallowed him so I adapted to a Mickey onesie.  And then Halloween came and Charlotte refused to put on her Minnie dress so I ended up with a grumpy cheerleader and a baby in a Mickey onesie.

So this year I decided that I was over Halloween.  With packing and moving and building a house and taking care of kids, going all out for a holiday that I’ve never been a huge fan of didn’t seem like a good way to make myself go crazier than I already am.  So I decided that James would wear an Alabama football outfit that he got for his birthday (thanks KayKay and GrandDavid!) and Charlotte expressed some interest in dressing up like Doc McStuffins.  I knew this year not to stress out about it so I bought a purple and gray striped henley from Old Navy.  I realized that she already had a pair of polka dot leggings that would work and I had picked up a $3 pink skirt at the summer clearance at Target.  So all we needed were a doctor’s coat and a sparkly headband.  I found a set of purple headbands (one being sparkly) in the dollar spot at Target and Memma went ahead and ordered a doctor’s coat.  We talked about her outfit for a while, but since she’d never put it all on together I wasn’t sure what was going to end up happening.

After the kids got up from their naps I put James in his football outfit and started to get Charlotte’s Doc outfit on.  To my surprise, she was excited to get everything on….until we got to the doctor’s coat.  I didn’t really fight it and after Jason got home we headed to the front porch for some pictures by our non-Jack-o-lantern pumpkins (yep, we didn’t carve a pumpkin this year either!). 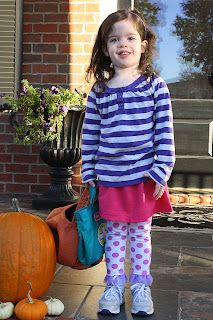 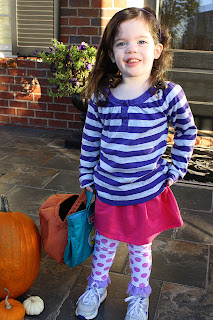 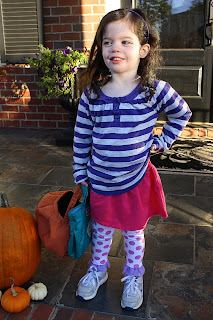 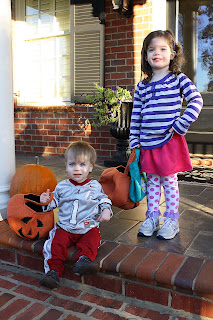 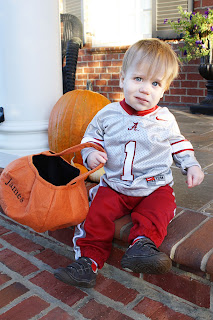 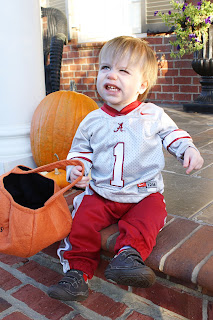 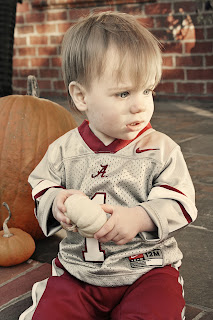 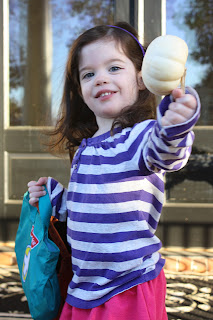 After we finished with our pictures, we headed to Dr. Mike’s to trick or treat.  Dr. Mike is one of Charlotte’s favorite people so we thought it would be a safe bet to start our trick or treating there.  Turned out to be a bust.  She wouldn’t say a word…and she usually won’t quit talking to Dr. Mike!  We then headed to Memma’s and Papa’s.

All afternoon I had told Charlotte about saying “Trick or Treat!” and she ran around the house screaming it.  But when it came time to say it in real life, she wouldn’t even say it at Memma’s! 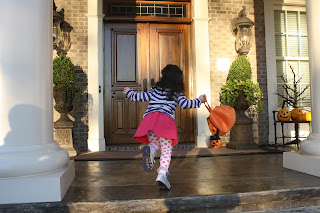 We had two kids in need of food once we got to their house and their patience had been worn down.  We ended up sitting on the couch and watching a Doc before eating some pizza.  Memma and Papa managed to get Charlotte out to Mrs Talitha’s house to Trick or Treat but we didn’t even attempt to take James out. 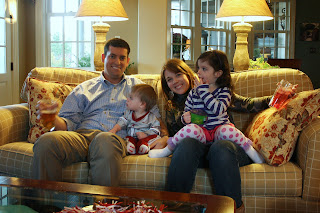 It was a rather stressful evening but part of being a parent is remembering when something is really important or not.  And Halloween?  To me, it’s just not worth getting stressed out about.