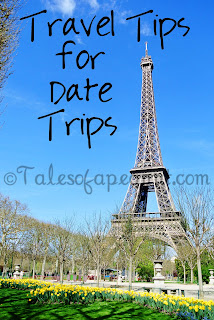 As I’ve mentioned, Jason and I started planning this trip to Paris over two years ago when it was coming up on our five year anniversary.  Then we got pregnant with James and realized that trying to take a trip 8 months pregnant might not work out so great.  And then the next year, I was still nursing so getting away for an extended trip would involve lots of stress before the trip and the hassle of pumping while gone.  So we decided to delay the trip until we could go stress-free — and that landed us on this year!
We hadn’t been on a trip that was solely just the two of us in a long time.  So when I was thinking about what I needed to pack to keep myself entertained I had to search my mind to remember what trips like these were like.  I missed my mark a little and wanted to share my advice with you in case you’re getting away with your sweetie soon sans kids and have forgotten what it’s like.  (PS If you haven’t gotten away just the two of you in a while you definitely should!  It’s so important for a marriage and SO NICE to remember how much you truly love and enjoy spending time with your spouse!)
To start my entertainment packing, I first made up a playlist on my phone full of songs that I love but never get to listen to since I’m never in the car by myself.  I was excited to get to listen to some of “my” music and, as it turns out, I never even turned it on while we were gone!  I enjoyed catching up with Jason so much that I never even considered just zoning out to music.  So, if you’re pushed for time, this is a step I would skip.  If you end up having time to listen to music you can listen to the playlists you already have loaded.  And our Samsung Galaxy pads that we got on the flight had a few albums pre-loaded on it so we could have listened to those if we wanted.
My next point of interest was to get some new books for the trip.  If you’ve read the blog for long you probably know that I am a book-a-holic.  Books have always been a weakness for me and now that I can get electronic copies they’re easier than ever to have at my fingertips.  I get a lot of the books that I read off of Amazon’s Top 100 Free books but you have to be prepared to not really look at book covers and just skim titles because a lot of those books are way too provocative for me.
I decided to download three new books by an author that I have read previously (Janice Thompson

).  I got two titles to complete a series that I had started months (years?) ago when I downloaded the first book in the series from the free books (don’t they always put the first one for free and then hook you — these publishers know what they’re doing!) and the third was the first in a new series from the same author.
The “Backstage Pass” series was wonderful.  It was set in present-day Hollywood so lots of glitz, glamour, and action, but with a Christian storyline.  In my opinion, you can’t get much better than that!  And I also love that you follow the same set of characters in the series, just focusing on a different one with each book.
I loved the first book in the “Weddings By Design” series.  It ties in to both the Weddings by Bella

series and the Backstage Pass series but centers on new characters.  I love getting to catch up with beloved characters who play a supporting role in new books.    (Karen Kingsbury also does this very well but I’ve had to quit reading her books because they are too sad.)
The one thing that I had forgotten about airplane flying and eReading is that you can’t eRead during takeoff and landing.  I didn’t pack any magazines or “real” books and so that left me stuck with nothing really to do during those times.  So in the airport on the way back, I picked up a book in a shop that I could read on takeoff and landings.
This book was still contemporary but wasn’t Christian themed but I still enjoyed it.  It was a fairly quick read and there were only a few parts that I had to skip over.  It gave me something to do while reading on my phone was banned and I found that even when I could start reading my eBooks I wanted to finish the book first!  Next trip I’ll definitely remember to bring at least a few magazines or an actual book to keep me occupied during those times.
And an international trip wouldn’t be complete without watching some movies.  As I mentioned in my post about traveling, we were provided with a Samsung Galaxy pad and Bose headphones on our flight.  (As a disclaimer, we did fly Business Class with American Airlines and it was worth every penn of upgrade that we paid for it.  Since we got our plane tickets and hotel and breakfast for a song at a live auction, we paid the upgrade price to celebrate our anniversary and did not regret it!)  We were able to watch a number of movies that we had wanted to see (Twilight, Breaking Dawn, part 2, Argo, Les Miserables) while flying over the ocean.  We even watched Argo simultaneously on both of our devices so that it was almost like we were watching it together and we could laugh at the same parts at the same time!
If we fly for that long again and aren’t going to have something like that provided I would definitely stock my iPad with a few movies that I haven’t seen yet and want to watch or some that I want to watch again.  I feel like it would be a good investment to help you disengage while in the air for that long.
The one thing that I would suggest the most before leaving on a date trip would be to make sure and discuss your expectations with your spouse before you leave.  It would have been sad if I had wanted to talk with Jason for the whole plane ride and he wanted to read a book and vice versa.  We were able to spend plenty of time reconnecting but still get some decompress time by ourselves by occupying ourselves with things that we were interested in.  Especially if you’re traveling internationally and aren’t going to add an international data plan onto your phone (we didn’t), remember that all the time that you’re out you won’t be able to check email or Twitter or anything else, so you’ll be spending 100% quality time during the days.  It was nice to be able to go “off the grid” during the days and spend that time soaking up time for just the two of us!

Our Opinion of the Very Best of Paris

The City of Lights