Now to show you one of my favorite features of the house…the kitchen banquette!
When I was pulling pictures for the architect I found banquettes everywhere online and decided that, if possible, I really wanted one.  I figured that it would come in handy when the kids had friends over to eat and that it would be a comfy place for them to spread out when they needed help with their homework while I’m cooking dinner.  So Mark skillfully worked in a one sided banquette to our kitchen and I love how it turned out! 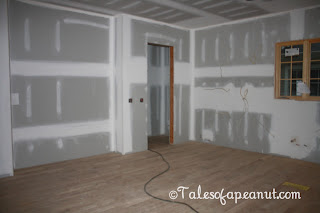 Here is the space sheet rocked.  The cutout portion on the left side of the picture is for the banquette.
Mark just drew in an opening for the banquette and I was in charge of “designing” it.  I ended up doing a lot of research about banquettes and found that the forums at Garden Web provided lots of help in figuring out what dimensions we needed.
In case you’re interested in the mechanics of it, here’s the info.
– A standard seat depth is 18″ – 22″.  Ours is 22″ deep with about a 3″ upholstered backboard.  It is a little deep for Charlotte and I (I’m 5’4″) but should be able to accommodate James as he grows and his friends.
– A standard seat height is 18″.  Our wooden bench is 18″ tall with another 2″ on it for a cushion.  It’s a tad high but, again, should accommodate growing and adult men.
– Our banquette length is about 78″ long.  Our kitchen table is 72″ long. 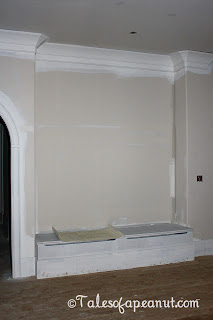 Here is the base built out and primed.
At the same time the trim guys built out the seat, they also cut out a large piece of material to be given to the upholsterer for the back piece of the seat.  I stood with KC while he cut the board and helped get a curve on the top that I was happy with.  Our back piece was 36″ tall (so it’s top is about 56″ from the floor).
We also had the guys build it with an empty interior and piano hinged doors so that we can store things under the cushion.  It is a pain to get in and out because we’ve got to move the cushion and the back piece is HEAVY, but since I’m just using it for off-season items it’s been fine so far.  KC tried to talk me into putting drawers or doors on the front of the banquette since they’d be a little easier to get to, but I knew that I would have to move the table either way and I prefer the solid face of the trim on the bench as opposed to it being broken up with doors or drawers.  (Plus, I figured having them custom make drawers would be much more expensive!)
So now, the finished product! (PS My new chairs still haven’t come in so please excuse the temporary ones!) 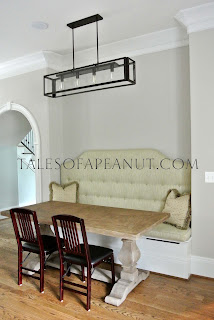 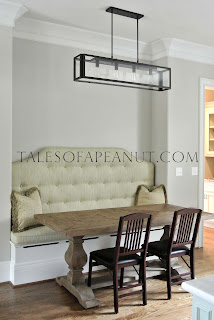 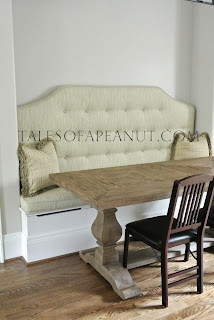 I am really enjoying this seat.  Charlotte and I sit on the banquette for meals and she likes scooching right up next to me to eat.  It’s comfy and we both sit with one of the pillows behind our backs for support.  When we’ve had parties here the banquette always fills up and we’ve had as many as five people (including Charlotte) eating on that side of the table at one time!

Getting in and out of the banquette is a tad of a challenge though since the banquette is recessed into the wall somewhat.  We made sure to get our table (review of it coming soon!) shorter than the space so that there’s room to slide into the bench, but without getting a table that’s significantly smaller than the opening it will still be a bit of a squeeze to get in.  If the ends were completely open that problem would be totally alleviated though.

For anyone wondering, the back piece is a piece of MDF (I think?) that was then padded and upholstered with fabric.  It is really HEAVY and is hung with a French Cleat that our builder bought at a big box home store.  It’s fairly easy to get on and off if needed and even though it’s heavy I have no concern that it’s going anywhere.  We made the cut wood about 3-4″ shorter than the opening in the wall to allow for upholstery.  It fits almost perfectly into the opening now.

We are loving our banquette and I anticipate us loving it for many years to come!