This morning we headed down to Birmingham to meet with a pediatric opthamologist about Charlotte’s eyes.  At her two year checkup our pediatrician did a preliminary eye exam with a pretty cool device that “read” her eyes and it indicated that her eyes might being seeing things with two different visions.  So he wanted us to see a specialist because there might be something that he could do now that would help her not have to wear glasses/contacts throughout her life.  So we headed out this morning and Charlotte was pretty content during the car ride with her animals, her burp cloth (to wipe hers and her animals noses), snacks, and Mickey. 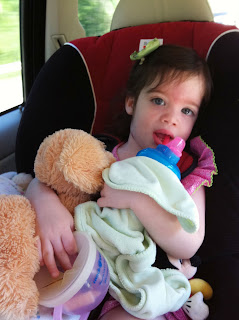 We got to the office without any problems and waited what I guess was a fairly short amount of time for a mid-morning appointment at a doctor’s office and then went in to see the nurse.  After checking C’s eyes out initially she put numbing drops in and then dilated her eyes.  That was definitely the not fun part!  We then had to go back out to the waiting room to wait for her eyes to dilate. 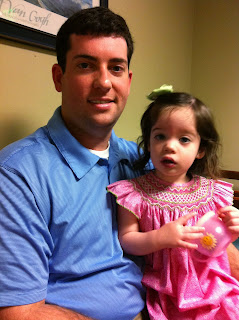 Thankfully, Charlotte’s a good waiter as long as we have the iPad so that made the wait fairly bearable.  She was not happy with the dilation of her eyes and occasionally rubbed her forehead and said, “That hurts me” but other than that it was pretty drama free.

The doctor eventually called us back and he did an exam manually on Charlotte.  Instead of having her put her head in the contraption and doing the different lenses on her eyes he held the lenses up manually, which seemed very tedious to me but I guess that’s the only way to do it with kids.  In the end he told us that Charlotte does have some vision discrepancies but that they are currently balancing each other out which allows her to see fine.  He left the decision on whether to fill the glasses prescription or not to us since he said that he wasn’t sure that they would really allow her to see any better or not.

It was nice to know that medically there was nothing wrong other than normal vision issues which we would expect since Jason and I both wear contacts.  And other than some crying when the dilation drops went in the appointment was very pain and drama free which was definitely an answered prayer.

We had decided to set up lunch with Miss Lindsey after our appointment since we were going to be in Birmingham and I’m so glad that we did.  It let us have a break from the stress of the morning and enjoy a fun Mexican lunch with a good friend that we don’t get to see nearly often enough.  Thanks Miss Lindsey for meeting us!  You were such a hit with Charlotte that for a lot of the ride home she kept saying, “Go Miss Lindsey’s house!”  We’re both hoping that you make it up to visit with us before you start seminary! 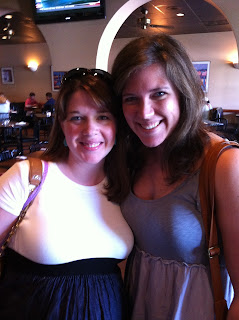 Since lunch was in the same shopping center as Edgar’s Bakery we had to stop for some sweets on our way home!  We didn’t have Charlotte’s sunglasses with us because we didn’t foresee her getting her eyes dilated so we got some disposable ones at the office.  Charlotte loved them and enjoyed wearing them and eating her sugar cookie from Edgar’s on the way home! 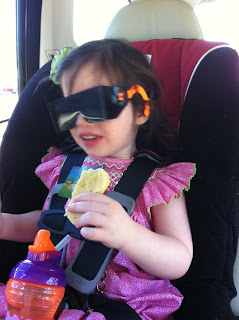 We appreciate the thoughts and prayers that were with us today.  We are very thankful that this is all that we have had to deal with health wise and know that there are so many dealing with so much more with their children.  It helps to have friends who text and tweet and call with their encouragement and I really appreciate it!  All in all it was a good visit with a positive outcome and we’re thankful for the ability to help Charlotte in any way that we can.

Now we’ve just got to make it to bedtime since we’re back home now and currently going on no nap which is a very, very rare occurrence for us!  I’m not going to go as far as to say that things are going good now because I don’t want to jinx us but so far the sugar from her sugar cookie hasn’t worn off!