You know those people that it doesn’t matter how infrequently (or frequently) you talk, but the moment you next speak or see each other you immediately pick back up where you left off?  Those that you know God placed in your life and you prayed fervently that it wasn’t just for a season and was for your life.  Kelly is one of those people for me and I am so thankful for her and for our friendship.  We had been talking about getting together for months and when I looked at my calendar near the end of June and noticed that we had a birthday party in Birmingham on July 4th and nothing else scheduled that week, I decided that it would be perfect to meet in the middle in Tuscaloosa!

Thankfully, Kelly was on board with the idea too so we started our scheming for our little getaway.  As the departure day drew closer, my anxiety at having FIVE kids in one condo with TWO Mama’s got much larger.  You could tell because Charlotte kept mimicking me saying, “There are going to be FIVE kids and ONLY TWO Mama’s!”  And before we even left town on Tuesday I was second guessing our decision after I remembered how much has to be packed and all the logistics that go into traveling with little one’s.  But by the time we made it to Tuscaloosa I couldn’t wait to see our friends! 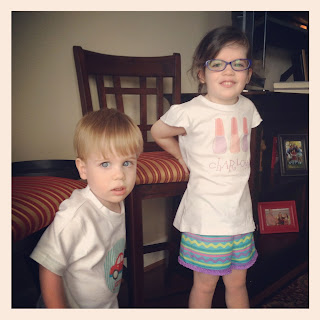 We arrived first and before putting James down to take a nap, I let the kids stretch their legs and we worked on teaching James how to say “T-town.”  (PS Notice their cute shirts from Little Lang’s! Adorable and they both LOVE them! No compensation for that, we just really love them and Jana’s my friend!)

And very soon our friends arrived!  I couldn’t wait to get my hands on baby C since I hadn’t even gotten to meet her yet.  I loved getting some baby time, although she’s not an itty bitty baby anymore! She’s growing so fast! 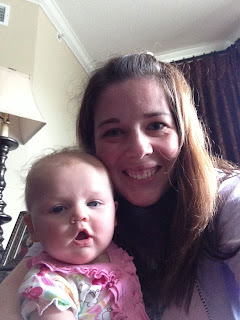 Charlotte and Caro clicked instantly just as if they hadn’t been apart for the last few years.  They were inseparable the entire trip and spent a good amount of time in Charlotte’s room playing by themselves while trying to keep the little’s away from them.

But that was ok because J and C enjoyed spending some time with someone their own age.  It was fun to see them play together since they are so close in age (five weeks).  I think J got C more into playing with cars and planes while C showed J how to feed her baby doll’s! 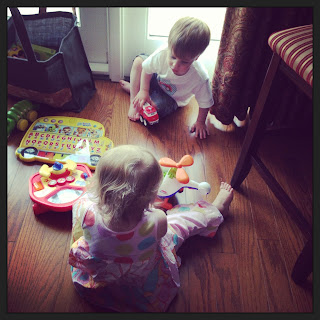 I thought that we would order in most of the time because the thought of taking five kids out to eat was way too daunting for me.  But I underestimated the stir-craziness that would set in with seven of us in such a small space.  So we headed out to let the kids burn some energy walking to Zoe’s in the stadium.  It ended up being perfect because we were the only ones there and the kids had the whole outdoor area to run around in and be loud in! 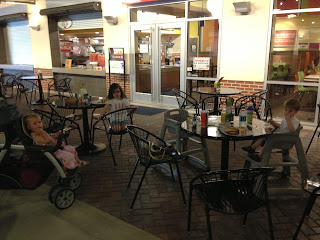 After dinner we went the more roundabout route so that we could look down sorority row and see the gaping hole where the Alpha Chi house used to be.  They’re building a new one and it’s going to be huge and beautiful, but it was still shocking to see air where the house used to be!  We (I) took advantage of the stop to get a pic of C in front of the Bryant-Denny sign.  I didn’t plan it, but it just so happened that C and Caro were such fast friends already that Caro wanted a picture in front of it too!  Isn’t it funny how God orchestrates things sometimes?? (Just kidding K&T! I promise!) 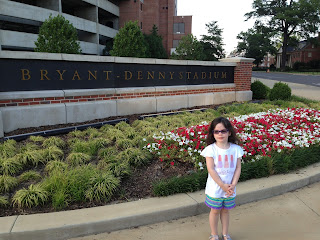 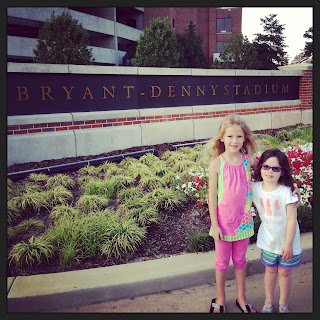 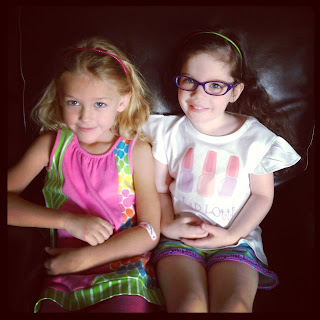 After, finally, getting all five kiddo’s to sleep Kelly and I got to spend some girl time chatting and it was so good for my soul.  I feel like most of my days are spent in isolation without getting to speak to any other grown-up’s, much less getting to reconnect with someone who knows you so well.  Any craziness that occurred on the trip was all worth it for our two post-bedtime chats!

On Wednesday everyone was raring to go again so we headed off to the Children’s Hands On Museum.  That is after we made sure that C and Caro’s hair was braided the same! 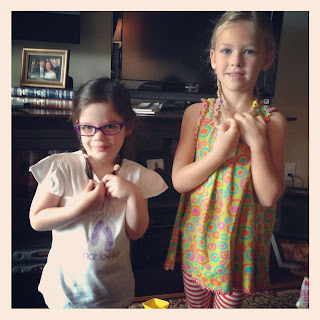 The kids had a blast at the museum.  There was so much for them to do and they could have stayed their for more hours than we spent there.  But they were having a Fourth of July party with a DJ and this Mama wasn’t really into the Grease soundtrack that the DJ was blaring at full blast. 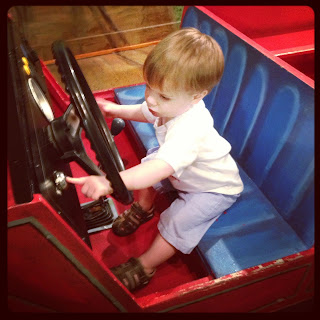 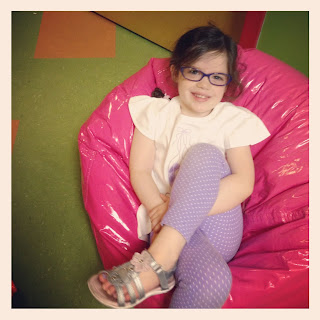 So we headed up the street to Moe’s for lunch.  It was quite an experience eating there with the kids since it’s basically a bar-type atmosphere.  We all sat in a high booth and the kids couldn’t get over why there was writing on the walls.  But it was great food and a relaxed enough atmosphere that we didn’t worry about the kids getting loud. 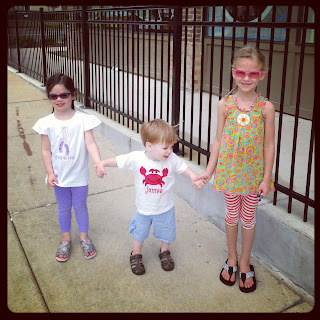 On the way back to our cars, Charlotte, James, and Caro all held hands for most of the way.  And when Charlotte would drop off just James and Caro would hold hands.  It was like James got another big sister and Caro got a little brother and they both loved it!

We had planned an outing to the splash pad after naps but the impending rain nixed those plans.  Who wants to get everyone sun screened and swim suited up just to stay for five minutes?!?! Not these two Mama’s in charge of five little one’s!  So we ended up going to a neighborhood playground and got to stay there about 15 minutes until the bottom fell out.  We headed to the bookstore to burn a little more energy before dinner.

It took a while, but eventually, all the kids were asleep and Kelly and I got to chat some more.  While we headed to bed at a reasonable hour the night before, on this night we couldn’t make ourselves get in bed!  We finally headed to our rooms at midnight and I think we only managed to stop talking then because Baby C had lost her passy.  It made for a long day the next day but, again, it was so very worth it!

Thursday morning was hard because our oldest weren’t ready to go.  They (mostly Charlotte) were crying and whining about not wanting to leave and were taking their future predictions on when they were going to see each other again (they were assuming NEVER EVER FOR THE REST OF THEIR LIVES) to epically dramatic proportions.  But I was sad to be leaving so soon too so I didn’t hold it against her.  I think Charlotte’s been missing her friends from school this summer so this trip to play with a friend who was older (and thus, so much cooler in her mind) came at the perfect time. 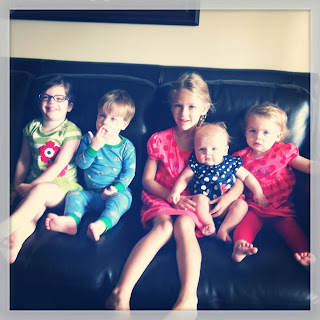 We did manage to snap a picture of all of the kids before we left although as I started to write this post I realized that Kelly and I didn’t get one together.  Guess that just means we’ll have to do again soon!!