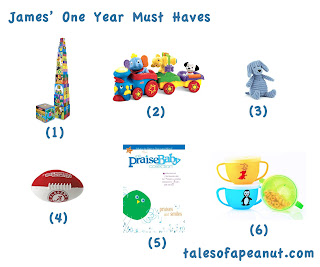 With Christmas approaching, I’m busy looking into gift ideas for my kiddos.  I love seeing what other parents are thinking about getting for their kids, but even more I love hearing what other kids my kids age actually love and play with.  So I thought that today I’d put together a list of some things that James is in love with right now.  He’s 14 months and can’t get enough of all of these items so if you’re in his ballpark age-range, I would definitely recommend any of these items!

James loves these stacking blocks.  They are sturdy enough that he can’t hurt them even if he puts all of his weight on them, but they also all stack into one block for easy storage.  James loves stacking them and knocking them down.  I think they’ll also be nice to have as he gets older since they have colors, letters, and animals on them.

This sing-along train is one of James’ (and Charlotte’s!) favorites.  It plays “I Just Can’t Wait to be King” from The Lion King as well as says a few other phrases.  There are also stand alone animals (Simba, Lucky, and Dumbo) which are a big hit at our house.  James loves pushing the engine all over the house and stops to dance when it starts singing!
(3) Cordy Roy Blue Dog Sm 9″ by Jellycat

This little guy’s name is Woof-Woof at our house and he’s James’ lovey.  James can sleep without him, but he seems drawn to him the most when he’s in his bed.  His feet, tail, and ears are a little crunchy now from so much love, but he’s so soft and so easy to wash that I don’t mind at all.  He’s also not huge so he’s easy to throw in James’ bag when traveling.
(4) NCAA Alabama Crimson Tide Football Smasher

James is definitely getting into his boy role and loves all balls these days.  He enjoys trying to play catch with anyone and “tackling” whoever has the ball.  He loves his Bama football but also enjoys any type of ball and this Melissa & Doug Sports Bag Fill & Spill

has provided James with hours of entertainment.
(5) The Praise Baby Collection: Praises and Smiles

Let’s be real, some days I’m at my wits end by the afternoon and the kids are too.  It’s on those days that I resort to Praise Baby dvd’s and I don’t even feel bad about it.  The kids spend about 30 minutes dancing and singing along to praise music while also exclaiming over the video of animals and kids and shapes and numbers and letters.  This one is one of our most requested dvd’s but we have a number of them and they are all fantastic.
(6) 3 Pack Snack Trap (colors may vary)

While James might not say that he really loves his snack traps, I am very thankful for them!  They’re easy to clip onto his straps in his stroller while Charlotte is at dance and helps keep him entertained and also full.  This little boy will eat about anything you put in front of him so having a couple of these pre-filled are handy to pull out.  James manages to make a pretty big mess, even with the snack trap (Charlotte didn’t make nearly as much of a mess with them), but when we’re out and about the snack trap keeps them pretty contained.  I’ve found that these are a little easier for small hands to get food out of than some other brands of similar items.
I would love to hear some suggestions for James or Charlotte for Christmas lists or things that your kids love that I haven’t thought of!  Check out my friend Nicole’s Christmas Countdown series for her family’s wish lists this Christmas.
Disclaimer: No one asked me to list these items and my opinions are all my own. But if you purchase one of these items through these links on Amazon I might get a few pennies through the Amazon Associates program.

Show Us Your Life – What you make/sell

Show Us Your Life – Favorite Apps