I mentioned in my Easter post that we celebrated Gramme’s birthday on Easter Sunday.  I asked her what dessert she would like since it was her birthday and, while she was reluctant to add more to my plate, she finally said that strawberry cupcakes would be good.  So I set out to find the best strawberry cupcake recipe and I’m happy to report that I think I found it! 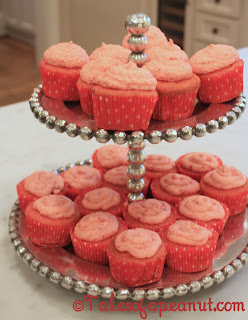 I modified the Southern Living Triple-Decker Strawberry Cake recipe to make cupcakes and iced them with the Southern Living Strawberry Buttercream Frosting Recipe.  This made 48 cupcakes and enough icing to ice them with.  They were delicious and moist and so good.  I got tons of compliments on them and even sent the leftovers to work with Jason on Monday where they also got rave reviews.
Some notes from my cooking:
– I cooked each pan of cupcakes for about 12 minutes in a 350 degree gas oven set on Convection Bake.  You’ll need to modify accordingly, just make sure to test a couple to make sure a toothpick comes out clean to ensure that they’re done.  They’re not as firm coming out of the oven as cupcakes usually are and if you leave them until they are totally firm they will end up browning as they cool.
– By using a smaller scoop to get my batter into the cupcake cups I was able to get cupcakes that were flat on the top and perfect for icing.  I would recommend filling no higher than halfway up the cupcake cup.
– I used a little less powdered sugar and chopped strawberries than the icing recipe called for.  My icing was a tad runny as I iced the cupcakes but hardened up to the perfect consistency by the next day when they were served.  You might want to let the icing sit a little while before icing the cupcakes to make it easier on you.
– These are much better the day after you make them and even better the day after that!  If you eat them still warm they are very rich.
– I put my icing into a pastry bag and piped it onto the cupcakes.  This uses more icing than the traditional way of icing (with a spatula or knife) so be aware if you’re making a full 48 cupcakes and only one batch of icing.  You’ll notice in the picture that the cupcakes on the top level of the stand had much prettier icing on them than those on the bottom.  I started to run out of icing and so didn’t use as much on the bottom cupcakes.  If you want the perfect shape for the top of the cupcakes you might want to make 1 1/2 recipes of frosting.

Recipe Wednesday – A week of recipes